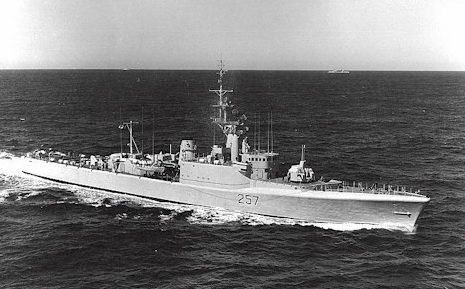 1. Origins and Timing of the Conversion Programme

Of the seven ships of the 257 (Restigouche) Class, only GATINEAU, KOOTENAY, RESTIGOUCHE and TERRA NOVA were converted. Originally the Defence Council approved the conversion of the seven ship class; this was authorised by T.B.Minute #639183 dated 8 April, 1965. The RESTIGOUCHE photo above courtesy DND.

In January, 1966 a revised and accelerated 7 ship programme of conversions was published at an estimated cost of $52,146,000 (1966$s). This estimate reflected a change in the concept for the conversion. The initial concept of a helicopter carrier was rejected due to stability limitations which would have existed with the retention of the 3"/70 forward gun and a flight deck. The major improvement originally intended for the conversion was the fitting of improved Sonar capabilities which, in 1966, were being researched under the title of the Diana One Sonar System in TERRA NOVA. For an anti submarine weapon, the USN ASROC System was adopted using the US company UNIDYNAMICS Handling System. On November 10, 1966, a 6 month delay and a revised programme was approved of a 13 month conversion period for each ship with COLUMBIA being the first, and the last conversion completing by 30 September, 1969.

In 1968, the increasing costs of the then current DDH 280 programme along with forecasted personnel shortages resulted in the reduction of the 257 Class Conversion programme to 4 from 7 ships. The early stages of many of the equipment contracts allowed the Department of Supply and Services to reduce the numbers. A revised programme cost of $49,700,000 (1968$s) was approved for a four ship programme consisting of a new EW suite with a new mast; a new stern increasing the ship’s length by 15 feet and with the 3"/50 gun removed; a Variable Depth Sonar including the 502 Handling Gear; an ASROC installation and a complete AN/SQS 505 Sonar Outfit. The installed fire control solution for the ASROC was generated by a state-of-the-art digital computer receiving its information from the sonar utilizing recent acquired solid state electronics.

TERRA NOVA completed the last phase of her conversion returning to service in the Fall of 1968. GATINEAU was converted and refitted in the Esquimalt Dockyard (SRU§) between 9 September, 1969 and 14 April, 1971. The conversions of KOOTENAY and RESTIGOUCHE were tendered with the contract being awarded to Halifax Shipyards for both ships. A major refit was included in the conversion contract and, in the case of KOOTENAY, this refit included the repair of the damage sustained in the engine room explosion of 23 October, 1969. KOOTENAY was re-commissioned on 7 January, 1972 with RESTIGOUCHE completing later the same year.

2. Effects of the Programme on the Canadian Industrial Base

Quality Assurance Programme: The tender documents issued for the conversions of KOOTENAY and RESTIGOUCHE included a requirement for the shipyard to have a formal quality assurance programme that met the details shown in the new quality specification prepared by the Department. This was the first time such a requirement was included for commercial shipyard work performed on naval ships.

Development of the 502 VDS Handling Gear: A development and production contract was awarded to Fleet Manufacturing of Fort Erie, Ontario for this equipment. Extensive added facilities to the Fleet Manufacturing plant were secured and retained by the company in completing the contracted equipment. The company supplied 8 sets of the handling gear for the converted 257 Class destroyers and the 4 DDH 280 Class ships.

Improvement in Government Programme Management: The 257 Conversion Programme was completed below the revised approved programme amount of $49,700,000. The contract with Halifax Shipyards was strictly monitored for extras. It was also one of the earliest cases of the Government suing a shipyard for negligence in the performance of their work. In the case of the RESTIGOUCHE work performed in Halifax Shipyards, it became apparent during the sea trials, following the acceptance of the ship from the shipyard, that acid from the contracted acid cleaning of the boilers carried out during the shipyard conversion period had been allowed to enter the steam systems. The Department of Justice sought compensation from the company for the loss of operational time which the ship suffered in correcting the accelerated corrosion caused by the leaked acid of the acid clean. The formal Quality Assurance Programme used during the contract had clearly identified the company’s responsibility for the operating and maintenance of the ship whilst in the shipyard’s hands. The case, “The Queen V Hawker Siddley (Halifax Shipyards) and Chemi-Solv”, extended over a seven year period and was eventually settled out-of court in the Crown’s favour in 1979.

3. Sources of Information on the 257 Class Conversion Programme

Some ship information and dates are contained in the book titled “Cadillac of Destroyers - HMCS St.Laurent and Her Successors” by R.Barrie and K.Macpherson, ISBN 1-55125-036-5, published by Vanwell Publishing Limited.