This page contains news of developments at CNTHA of interest to volunteers and others.

2019-04-11: CNTHA learned recently of the passing of Vice-Admiral Robert Saint George Stephens. Bob became a Naval Cadet, RCN in September, 1941 and retired as a Vice-Admiral in 1979. He served his country well in a variety of positions in various parts of Canada and overseas. He was interviewed by a team of CNTHA supporters at a CANDIB meeting held April 17, 2008 where he spoke about his impressive career. That interview transcript can be found here. Admiral Stephens passed away in England, April 9th, 2019 at the age of 95.

2018-10-19: Peter MacGillivray has assumed the role of Assistant Webmaster.

2018-05-25: CNTHA Meeting. At this meeting attendees began a discussion of the website and the need to boost efforts to obtain new content. It was indicated the following should be considered:

At this meeting it was noted that Simon Page is leaving his current post as DGMEPM this summer. He has been succeeded by Commodore Chris Earl. It is hoped that CNTHA will be able to arrange a meeting with Commmodore Earl for a briefing on the breadth and scope of the work undertaken by CNTHA as the preserver of Canada’s Naval Technical History.

2017-11-30: At this regular meeting of CNTHA, Commodore Simon Page, DGMEPM participated in a good discussion. Tony Thatcher, Executive Director, briefed DGMEPM on the form and structure of CNTHA, noting that this group of volunteers was continuing to build a strong collection of historical documents. As noted earlier, CNTHA and DGMEPM had signed an MOU in January of this year and the discussion today served to expand on the significance of that MOU and the working relationship between the MEPM Division and CNTHA. The CNTHA objective, to preserve Canada’s Naval Technical history, was the backdrop for an excellent exchange of views and ideas for collaboration in the future. Here are two photos taken at that meeting. 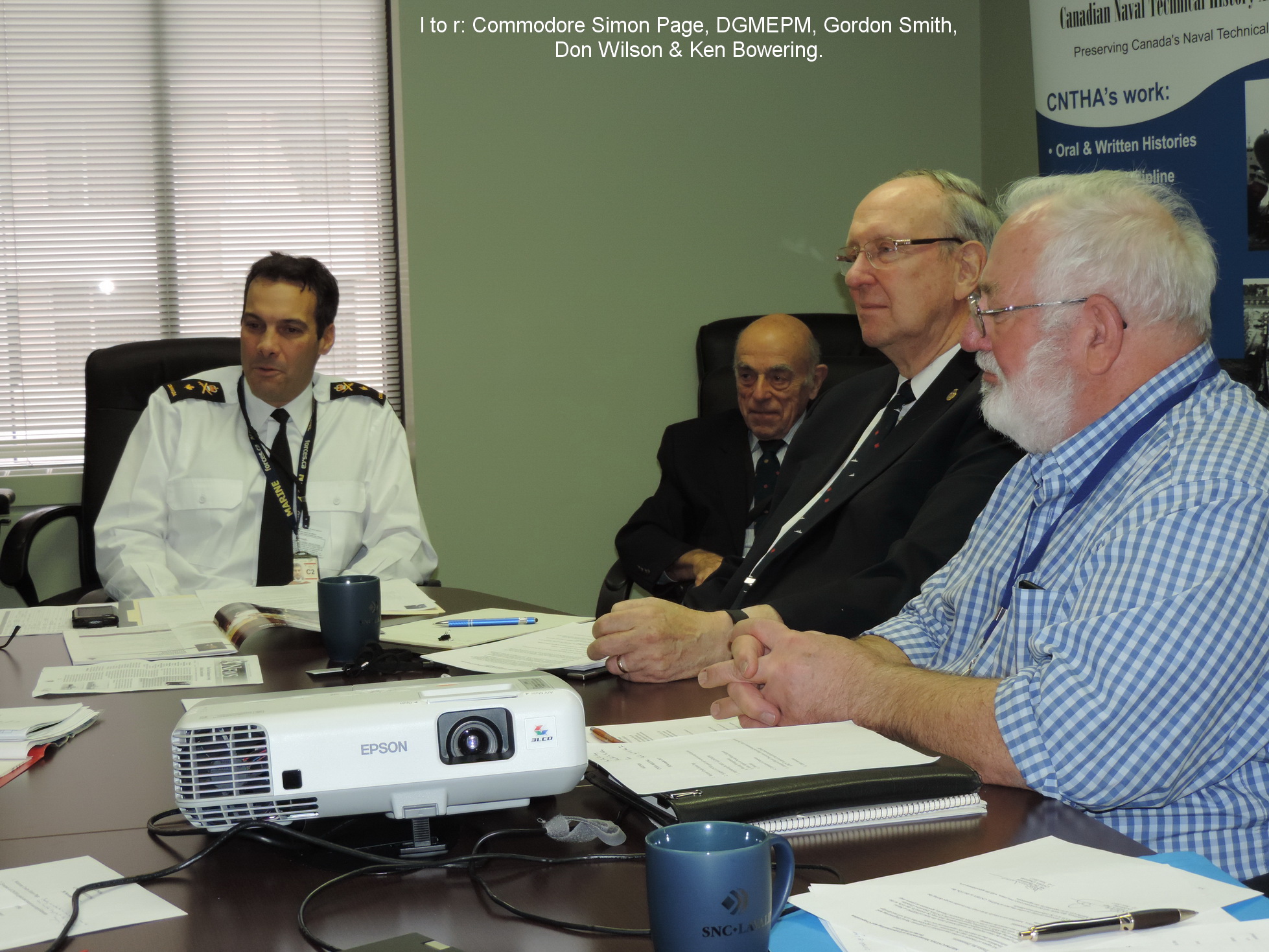 2017-10-14: It is time once again to reach out to readers to invite them to share any material they feel would be of interest to CNTHA-adherants. We are always on the lookout for any technical information, news or personal recollections that we can add to this website. Please share your information with us by email - addressed to "[email protected]".

2017-08-12: CNTHA recently posted an interesting interview transcript for which the subject is CANEWS. Visitors are invited to read the posting and, if so inclined, to offer comments by sending an email to "[email protected]".

2017-06-22: Commodore Simon Page, DGMEPM and Pat Barnhouse, CNTHA Chairman recently signed a Memorandum of Understanding and Cooperation. CNTHA’s primary aim is to capture and preserve oral and written records of Canada’s naval technical history by encouraging the establishment of a culture in which naval technical history is preserved and made accessible to future generations. The Maritime Equipment Program Management Division (MEPM) can support this role through better awareness and coordination between the current naval engineering enterprise and CNTHA. In addition, CNTHA can thus become better informed of activities and events of significance so as to ensure these events are captured for future generations. Clearly the MOU will benefit both organizations.

2017-05-03: The first block of replacing attached Adobe versions of Oral and Written Histories with webpages has been completed. There will be some minor touch-ups over the Summer but the major work has been done. CNTHA wishes to thank Jeff Wilson for all the work he has done in providing to CNTHA a new and much more secure website for which he also provides the hosting services. Needless to say, our Webmaster is also very pleased with the replacement of the vulnerable Joomla-based website by the new site now available.

2017-04-21: Work has begun on a project to post the Oral and Written Histories as webpages rather than as Adobe-based documents linked to a webpage. This is being done so that the Histories contents can be searched by this site’s effective Search engine. This project will take some time but some results should be seen later this summer.

2017-03-18: CNTHA is coming to a landing on its new server. If you notice any unusual behaviour needs some attention please drop us a line. 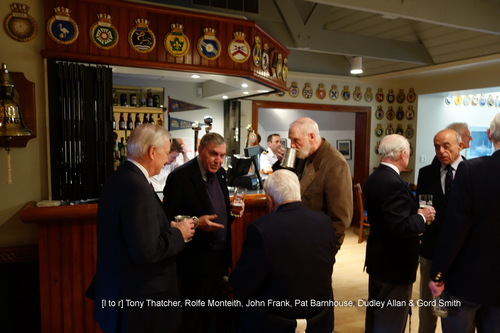 2015-10-06: A CNTHA team meeting was scheduled to coincide with a visit to Canada by CNTHA’s UK-based team member, Captain Rolfe Monteith. As we expected, Rolfe made good contributions to the team meeting that also was attended by our DHH key contact, Senior Naval Historian Mike Whitby.

2015-09-26: A slight modification has been made to one of our archiving sections. The expanded Collection xtracts section has been re-named the Library. It is intended to archive there relevant information shared with CNTHA in electronic format. The first entry is three files shared with us by Jerry Proc, a noted archiver himself.

2014-12-08: A new feature has been added to this website. Anyone wishing to ask us a question, volunteer to be interviewed for our Oral and Written Histories page, or comment on our website and services, may now send us an email message to "[email protected]". 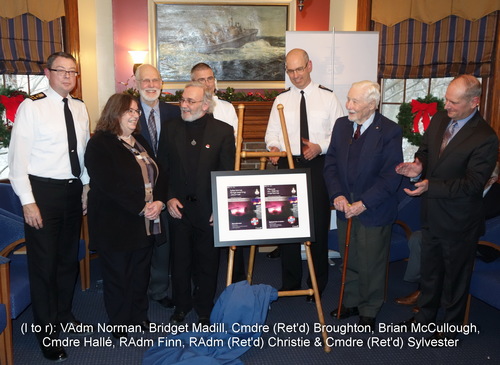 2014-11-26: Members of CNTHA gathered at the HMCS BYTOWN Officers Mess for the Launch of the 75th issue of the Maritime Engineering Journal. Present were approximately 40 persons interested in the Naval Engineering community including the Commander, RCN, VAdm Mark Norman, RAdm Pat Finn, Cmdre Marcel Hallé and several former Chief Engineers of the Navy. From CNTHA, the Chairman, Pat Barnhouse and the Executive Director, Tony Thatcher along with several others were present. There were a number of presentations made during this very interesting but informal event all to celebrate the benefits to the Naval Engineering profession provided by the Journal. Visitors to this site will be aware that the complete archive of the Maritime Engineering Journal can be found under Publications - or follow this link the Journal page. Photos taken at the Launch will be added to this page in due course. In the meantime, the pamphlet provided by DND at the event has been scanned. Here is the pamphlet link. 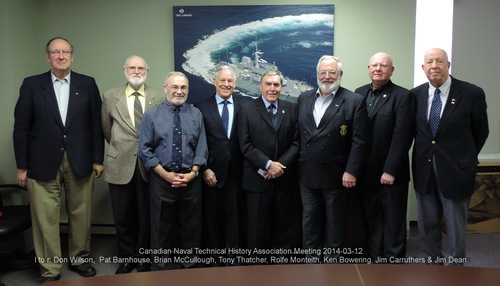 2014-03-12: The CNTHA Committee Members were pleased to welcome to our meeting our Member from the U.K., Rolfe Monteith. During the meeting, our Executive Director took the opportunity to provide a briefing on CANDIB and other work done by CNTHA to date and with an outline of work still to be done. Tony Thatcher’s paper may be found by clicking here.

2013-09-01: Regular visitors to this site will realize a change has been made. We have recently moved the site to another host and, at the same time, enlisted the assistance of a developer to upgrade our website software. This has been done to increase our security and to update the “look and feel” of our site. A new photo Gallery is under development and will be expanded as volunteer time permits. Please enjoy our new look and should you have any comments, direct them to one of the contacts on our Contact Us link at the bottom of all website pages.

2012-12-17: Those visiting this site who may be interested, will find a complete archive of all CNTHA Newsletters - as far back as Issue #1 in March of 1997. To view these Newsletters, please click on CNTHA News.

2012-11-28: Unfortunately, it has been found necessary to turn off the Comments feature when over 30,000 inappropriate comments appeared in our Photo Gallery. All the photos remain visible to visitors.

2012-11-18: Visitors wishing to review current and past issues of the Maritime Engineering Journal may now view all issues right back to the first issue in 1982. A complete archive is available on the Journal page of this website.

2012-09-13: At the regular CNTHA meeting this date, the Chair confirmed the establishment of a Website Editorial Board. Members of the Board, who will provide advice to the Webmaster on website content, are Pat Barnhouse, Tony Thatcher, Brian McCullough and Don Wilson.

2012-07-25: The Webmaster visited Calgary’s Military Museum and there had an opportunity to visit the display of the port propeller taken from HMCS HURON. For additional details, please visit the article written as a partial history of HURON.

2012-06-25: Work has begun to scan old issues of the Maritime Engineering Journal so that the Journal page on this site eventually will be the principal archive for this professionally valuable series of publications. All published Journals have been listed and as scanning is completed a Journal will be uploaded and linked to the Journal web page. It is recommended that visitors to this site check back regularly to see what’s new.2012-05-30: Work is proceeding on establishing new links to marine-oriented organizations starting with the Canadian Naval Review. On this date, this website was moved and is now under the care of a new host in Ottawa - closer to CNTHA’s main centre of operation. 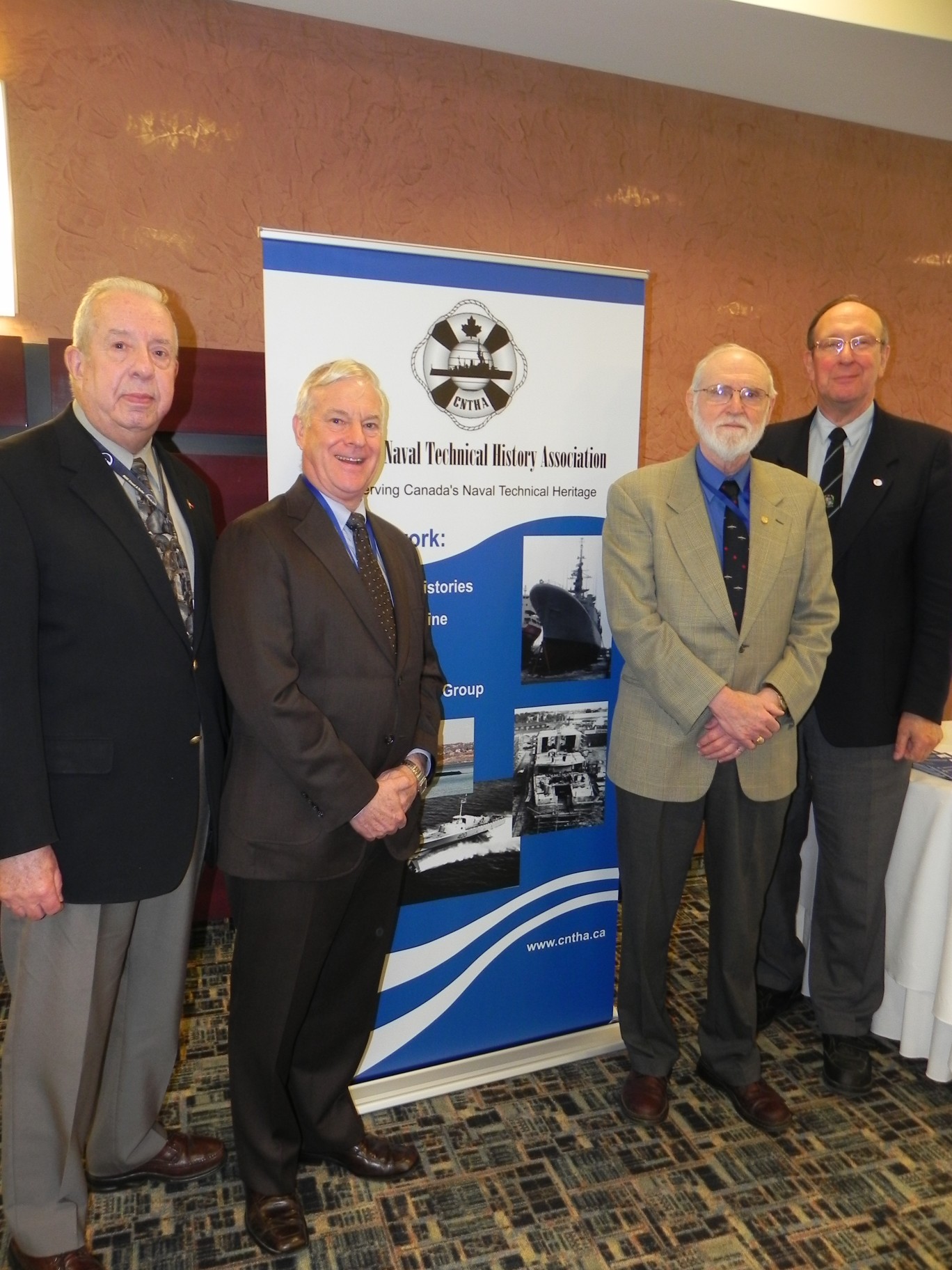 2012-04-10: CNTHA accepted an invitation to participate in Mari-Tech 2012, an event co-hosted by the Ottawa Branch of the Canadian Institute of Marine Engineering and the Eastern Canadian Section of the Society of Naval Architects and Marine Engineers held April 10 & 11, 2012. The event was very popular with over 500 from the marine community attending the event held at Ottawa’s Hampton Inn & Conference Centre. CNTHA members in the photo (left to right), Jim Dean, Tony Thatcher (Executive Director), Pat Barnhouse (Chair) and Don Wilson (Webmaster).

2011-02-23: The entire meeting was devoted to strategic planning for CNTHA. The session was facilitated by John Thomas, a former Naval Officer (Naval Architecture) and currently President of John F. Thomas Management Consulting. The session was most productive and a summary report was printed in the Maritime Engineering Journal #67 - the CNTHA Newsletter for the Spring 2011.

2009-11-06: At the regular CANDIB meeting, a number of changes were announced and volunteers present discussed the future of CNTHA. One reason for this discussion was Mike Saker’s upcoming move to Nova Scotia. After about 14 years as CNTHA Chair, Mike and his wife are leaving Ottawa to the comfort of a retirement home in Mahone Bay, Nova Scotia.

During this meeting, Pat Barnhouse was confirmed as Chair, CNTHA and Tony Thatcher as Executive Director. At this meeting, there was a discussion leading to a restructuring of CNTHA with the following agreed:

Working groups have been formed or will be formed under the mantle of CNTHA to investigate the many valued equipment and systems developed in Canada - many of which have found their way into others of the world’s navies.